I gave up everything I do. Much cannot be said of what it is worth, for it was a pure and a simple way of passing through time with the absolute minimum necessary sustenance I could possibly get. I was allowed to travel through time past but not time forthcoming, and I consented to retrospectively and critically harshly examine what was done onto me and I did for others.  I carried a torch and traveled through the pitch dark past searching where to find the truth. Travel as I did through the dark, its twilight’s truth was not forthcoming.

There were layers upon layers of falsehood wrapping the truth, so it became hard to unravel it from the rubbish tip.

And the master architects of these falsehoods were and still are four empires who scarred the face of the earth.

They were involved in many evil and wicked deeds to satisfy their frivolous desires that would not change their predestined lives anymore than the unfortunate others, a useless and wasted exercise of vanity.

Nonetheless, they had a belief that if they consumed the flesh of a female neonate  child, sold in the open market by a destitute mother unable to support the new born, they would not have to suffer the indignity of having crow’s feet spoiling their beautiful face for the rest of their lives. And they indeed practiced it hidden behind the Great walls of their empire, nothing to say or add, thus was the truth!

Others felt that if they were buried somehow above the ground and visible for all to see their corpse, they thought that was another way of remaining alive forever, still seen to this day, that is another truth!

But that was not enough to quench their love for this earth and wanting to stay live even longer than God is permitted.

They too wanted to extend their ownership of more land and they decided to displace the wretched undeserved and unfortunate conquest. They killed as many as possible and turn the rest into manual and sex slaves.

More importantly they introduced their foot soldiers to the conquest lands whilst they had the means to claim the land as theirs in case there comes a time a conflict may arises and they are contested.

The original owners of the land were either killed or turned to slaves to work on the land to feed the masters, denied to speak their language, practice their customers and culture. They are permitted to exist so long as they copycat their masters’ way of life without the privileges the masters have.

Look at the map of Europe and a place called ‘mini’ Russia miles away and surrounded by Lithuania and Poland.

Furthermore, the Russian now are claiming part of Ukraine is Russia proper just as some of the Amhara elites are shamelessly claiming Welkayet Tsegede as part of Amhara. Land grabbers will not stop nowhere, they keep dreaming, wanting to own a thing and everything. It is a sickness they will never be cured from that will see through their demise but they have no vision to foresee!

The Russians, the Serbs, the Chinese and the Amhara’s are caries and a pain in the tooth of this world.

That said, at least the former three had a visible homemade power and resolved to initially conquer the subjects, but that does not mean they were entitled to commit crime. Conquering other people’s land was and still is a crime.

The Amhara had no homemade power and resolve of their own to subjugate other people. They were and still are pests cable of causing trouble but nothing serious.

What they did to achieve the status the Russian and other managed to build was nothing other than treachery and mischief.

They deployed foreign power to help them control the so called Ethiopians who finally fell under their control.

First they sold part of the land of their Tigrayan adversaries to Italy for two reasons.

One to weaken and divided the Tigrayan force that could have challenged and stopped their treacherous act.

The second, they used the money, material and weaponry they obtained from the sale to subjugate the others part of Ethiopia to their knees.

No leader on Earth, apart from the Amhara elites, had sold part of the land they call theirs.

No imperial ruler, apart from the Amhara elites, excessively fabricate and lie to hide the truth people are now struggling to uncover.

When all nations in Ethiopia wish to live in peace and with respect to each other, the Amhara called this move as going against unity and one nation speaking one language.

What the Amhara elites want is one nation speaking their language and practicing their customers. The problem even if one were to do just that I.e. speaking one language, express on culture, kiss the dorsal of Amhara elites now and then,  the Amhara elites would not accept you as one of them. You are what you are, ‘an outsider wanting to imitate them’, but with no success or bless!

Anyone except them is entitled to govern and administer Ethiopia, even if one does the job better, fairer and more equitably than they did throughout their reign of terror.

You would be labeled as a terrorists who caused discord amongst the different people.

What the Amhara elites failed to see is this: the discord amongst the people is not caused because you recognized their ethnic differences but because you denied to recognize their differences and the respect that is due.

In 30 years the TPLP did more genuine development throughout Ethiopia than the Amhara did for 150 years.

Despite the murder, looting, raping and destruction by the Military government of the Dergue, not one single Dergue member was hanged or executed by the TPLF as a criminal who deserved the punishment.

Look what the Amhara elites have done and committed now. They savagely executed high officials of the TPLF and thousands of innocent Tigrayans.

But they have the audacity to call the TPLF terrorists, when they are themselves daylight terrorists!

Who would want to live with such murderers and hideous liars! 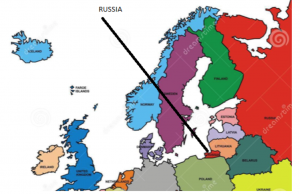 Disclaimer
The opinions expressed in this publication are those of the authors. They do not purport
to reflect the opinions or views of TADAUK.ORG or its members.

Neoliberalism has enabled genocide in Tigray