They finally came out of the closet and said what needed to be said. Better late than never. But do not forget this pronouncement came to light not because the act itself was wrong, but the correct judgment was finally ascertained because it came close to their doorstep before they knew it had. For all they care, they would have kept procrastinating and giving a blind eye if it had not threaten their safety. 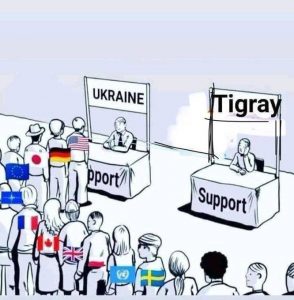 The West understands that the Russians use a list of playbooks of propaganda, disinformation, and accusations of crimes to justify their own cruelty committed in cold blood. It is honorable to speak the truth to power when cruel brutality is so evident for all to see. It is right and honorable to speak out against Russian aggression and the tactics it deploys to gain control and submission. Albeit better late than never. But it would be naive to believe it is done to defend justice nor to right wrongs without self-interest. If not, then where

were the world leaders, Amnesty International or the Human Rights watchdog institutions when friends and allies of Russia – Eritrea, Ethiopia, and Amhara expansionists – were massacring Tigrayans in droves in May-kadra and some even handcuffed and thrown into the Tekeze River only to emerge in the Sudan? They had the gall to not question the stunning accusation by Amharas that Tigrayans themselves were to blame as the perpetrators of the crime committed!

No doubt the acts and the disinformation deployed to mislead the world were one egregious thing but even worse was the unqualified endorsement of the propaganda by reputed international institutions, the likes of Amnesty International and Human Rights Watchdog that gave wide coverage of such furphies! It is especially outrageous given that they know such reports were pulled from the playbook of aggressors and collaborators without ascertaining the veracity of the information. This is a crime worse than the perpetrators.

Why would Channel 4 journalists accept Ethiopia’s invitation to visit parts of Amhara region that fell under the TDF for some time before the TDF evacuvated the place on its own free will and interview women accusing the TDF of rape, while the Ethiopian government refused journalists to enter the entire Tigray region to investigate and report? Is it not a selective reportage as it fits best on the part of Channel 4  and the Ethiopian government, even if we accept the cases were genuine but completely void of the context that rape was a stated military strategy of the aggressors in Tigray? Amhara women were out for a show as victims of violence and rape, exploited to make a ‘tit-for-tat’ argument that evil happens in war – an argument that completely missed the point that it was never a military strategy of the TDF to humiliate women, as it was during the explicit genocide in Tigray!

Selective amnesia, now you see now you don’t, now you remember now you do block the memory plexuses as it suits your purpose.

Why is the world silent when the Yemenites have been run over by the Saudi Arabians, bombed and destroyed for years without the right to run their own affairs?

If as now the world had given it adequate coverage and condemned aggression, then Ukrainian may not have been subjected to such level of aggression. Even if it did, those who call for the withdrawal of Russia would have a better image of themselves and would have the resolve to settle this crisis with integrity and the psychological support of all  oppressed people of the world.

Evidences and Analysis on the Biased Reporting and Lack of Independence, Integrity, Impartiality, and Professional Competence of the Ethiopian Human Rights Commission (EHRC) and its Chief Commissioner

Rubbing salt to the wound of Tigray!