The generation in charge of the polity of the Amhara ethnicity has not seen violence and mayhem compared to the past generation – nor have they witnessed gross misrule. Since 1991 there was no major war conducted in Ethiopia. Everything was relatively peaceful and people, Amhara or otherwise, led their lives in pursuit of happiness and tranquillity. Considering there was no mental and psychological damages one would have hoped that this generation would come out more humane and caring.

But it did not. In fact they turned out to be more violent and worst human rights abusers. It became involved in gang rape,  unbelievable destruction  of material assets, burning people alive and eating their flesh!

This leads to a conclusion that some of the  Amhara’s are retaining  traits of savagery, becoming  modern day barbarians who have not changed since the atrocities of the past. They share the same instinct of their forefathers who went on rampages, mutilating genitalia, woman’s bosoms, and burning alive humans.

The desire to live off others people’s resources and labour appears to be ingrained in the blood and nerve cells of all Amhara’s dead or alive. One wonders if there will ever come a change.

And the other the Amharas are pathological liars, stargazers and sorcerers who prefer to exorcize stained and bloody steins.

Read all the books they wrote and manufactured heroism they crowned themselves with, when in fact there is no major war they won, no work of art they built. It is all a mirage only they can see.

Everyone is entitle to lead their lives with or without performing extraordinarily. The world is not only home for performers, it is for all as defined by nature. This also goes for the Amharas as well as for others. But if, like the Amharas, one goes out of his way and brags for acts he did not perform, he has to be put in his right place.

The Amhara are adroit in reverse talk – Antimetabole, roll back Aksumite progress in to the dark.

Battle of Adwa in March 1 -2, 1896 was fought and won by collective force and yet whenever Amhara warlord who showed up in the battle field a road, bridge, school and/or hospital was named after, not a single alleyway let alone an institution was named after Alula, Mengesha Yohannes, Awallom etc Tiguan’s leaders. Not that the Tigrayans hankered for fame, they had fought and won foreigners in one too many battlefields. But to oppugn the Amhara claim of leadership qualities and statesmanship, they are not endowed with.

Look at the illustration taken in 1896, the year of the Adua was won, not callipygous but a steatopygic, not a pulchritude nymph, you can’t help but amorously blink but an eyesore obese, was claimed and documented to be leading the war from on a horseback tangibly charging full force at the enemy line, the Italian were unable to resist but collapse as a house of card.

The fact, the truth, the reality Itege Tytu was unable to stand and walk let alone to shake and nudge a horse with a shield on hand and spear or a sword on the other. She is disabled by her obesity! 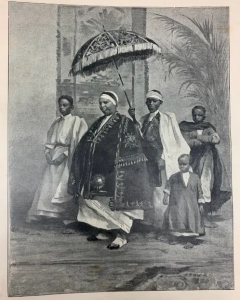 And the other, even Menelik was a victim of illness, tabes dorsalis, neurosyphilis  couldn’t , like his fourth wife, walk straight let alone to mount a warrior horse that tended in action to fly and float.

These are some of the fictions the Amhara repertoire rudely force others to swallow.

One cannot convince the Amharas their stories are fictions. Like all aggressors, they won’t accept they wrong others are right: but that would remain their own problem.  Hewers of wood drawers of water will not carry on the burden forever. Schadenfreude gloaters will not have a permanent scene of perverse pleasure displayed before it is turned over to confront the perpetrators. Filled with Epicaricacy horsemen they are in their droves but nine freudenfreude.

If the Push Comes to Shove: The Devil I Know is My Friend Than the Engel I Don’t!