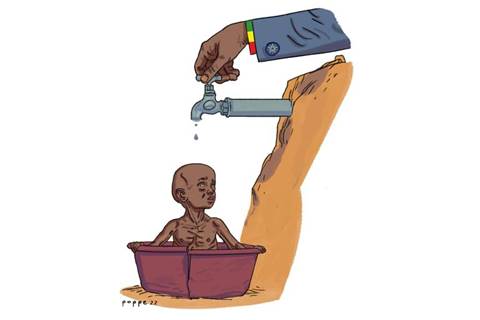 The federal government may blame the TPLF for Tigray’s suffering, but its medieval siege strategy is an open secret.

In 2004, Eskinder Nega, an Ethiopian journalist, activist, and politician, oversaw the publication of at least five columns in his Askual newspaper that labeled Tigrayans the Jews of Ethiopia and called for Ethiopians to emulate the strategies used by Nazi Germany.

When the civil war broke out in November 2020, such ideas have been implemented against Tigrayans by the Ethiopian government in concert with its allies in Eritrea and the Amhara region.

Comparisons to the Holocaust may seem a bit extreme. But events in Tigray are eerily reminiscent of the 1967-1970 Nigerian civil war.

In response to a secessionist war waged by Lt. Colonel Odumegwu Ojukwu in a predominately Igbo-populated territory called Biafra, the Nigerian government purposefully starved the population—leading to the death of up to a million children.

As evidence of the similarities, in 2021, the state-owned Amhara Media Corporation said Tigray’s future is “like Biafra” and Prime Minister Abiy Ahmed boasted that the Ethiopian government decides whether aid gets into Tigray or not.

Despite a slight improvement in the humanitarian situation since April, these genocidal plans are ongoing in Tigray. Much of the Ethiopian public seems to support these policies, or chose to remain silent out of fear and pressure, while the international community has not taken them seriously enough.

Policies implemented by the Ethiopian and Eritrean governments that appear designed to induce famine conditions in Tigray have been documented since the beginning of the war.

In June, despite the blackout imposed by Ethiopian authorities, determined reporters reached Tigray over rocky footpaths and, in a rare occurrence, filmed the horrors of the war. On 2 July, ARTE TV broadcasted their documentary, titled “Tigray: in the land of hunger”, which showed the effects of manmade starvation and the devastation of the region’s health system.

The events discussed by the interviewees and depicted in the 24-minute report include the Aksum massacre perpetrated by Eritrean soldiers, an eleven-year-old boy at the hospital who weighed only eight kilos, and people simply dying at home because they know that the medical centers are out of supplies and so can’t help them.

The UN recently posted celebratory announcements rather than telling the truth that its workers are still prevented from reaching much of the starving population of Tigray.

On 29 June, the UN claimed on social media that, since 1 April, the World Food Programme (WFP) has delivered enough food to Tigray to feed 5.9 million people per month.

However, the WFP Ethiopia country brief contradicts this. It states: “In the Tigray Region, WFP delivered food assistance to 461,542 people in May.”

Also, the UN Office for the Coordination of Humanitarian Affairs’ (OCHA) 17 June situation report notes: “Food partners in Tigray assisted more than 340,000 people with 5,303 MT [metric tons] of food during the reporting week.”

“Cumulatively between early April and 8 June, more than 20,000 MT of food have been distributed to more than 1.2 million people in the region,” OCHA’s report continues.

The reality is that from April to June 2022, a period of three months, the WFP only transported enough food to Tigray to feed 5.9 million people for one month in total.

Owing to the lack of fuel, only 1.4 million of the inhabitants of Tigray, about 25 percent, have been reached, while 15 percent of the required fuel and 35 percent of the cash needed for humanitarian operations has been allowed into Tigray by the Ethiopian authorities.

As one UN staffer told us: “It would be more accurate to report on impact than on MTs and number of trucks that made it through.”

Government officials have openly claimed to be imposing a Biafra-like siege on Tigray in an effort to subjugate the region and eradicate the TPLF.

On 12 June 2021, Minister of Foreign Affairs Demeke Mekonnendeclared, without providing evidence, that humanitarian actors tried to smuggle weapons to the Tigray Defense Forces (TDF). Such accusations have been used to block aid from entering TDF-held areas.

Eleven days later, in a TV interview, Abiy argued that the Derg government made a mistake during the 1980s famine by allowing aid delivery to Tigray. He was referring to accusations that the Relief Society of Tigray (REST), the TPLF insurgency’s humanitarian wing, diverted some of the aid towards military purposes in the 1980s.

After Tigray forces retook control of around 70 percent of Tigray on 30 July 2021, the Amhara Media Corporation posted an article calling to turn Tigray into another Biafra by “taking its breath away from all directions.”

Gizaw Legesse, a journalist regularly featured on ESAT TV, argued that the government’s strategy should be to build a buffer zone around Tigray to give the people “time for reflection” for three to five years.

Gizaw followed this up recently with a post on Facebook calling for the government, “to drag the negotiations for years, to give nothing for free before or during the negotiation, to realize that time is on the side of Ethiopia … and understand that under present circumstances, Ethiopia loses little by pursuing containment.”

On 4 August, Mitiku Kassa, the Commissioner of the Ethiopia National Disaster Risk Management Commission, publiclyrejected calls to open the routes between Sudan and Tigray for aid delivery.

Weeks later, Mitiku stated that the Ethiopian policy is to heavily restrict aid to Tigray due to fears it could boost Tigray’s army. As evidence, he produced a photograph of a surrendered TDF colonel side-by-side with photos of USAID high-energy biscuits.

Mitiku was arrested in early July, but this seems unrelated to his involvement in the Tigray blockade.

On 18 October, the Ministry of Foreign Affairs stated that it is absurd to expect unfettered humanitarian access to Tigray while the TPLF is attacking.

The next day, Abiy bluntly told the UN Secretary-General Antonio Guterres that Ethiopia will not open up humanitarian access for the UN to Tigray “unless the TPLF withdraws forces” from Amhara and Afar.

A month later, Debede Desisa, State Minister of the Government Communications Service, made unsubstantiated allegations that some humanitarian organizations have a political agenda.

On 5 January 2022, Government Communication Service Minister Legesse Tulu stated that if the people in Tigray want their rights to be respected, they should rise up against the TPLF. In other words, he admitted that these rights are deliberately being violated in order to punish Tigrayans for supporting their elected regional government.

Shortly before the humanitarian truce was declared on 24 March, the president of Afar region, Awol Arba, said, “there is no way that we allow aid to reach Tigray.”

On 27 March, Yodahe Zemichael, Executive Director of the National ID Programme in the Office of the Prime Minister, statedthat calls for humanitarian aid are part of an attempted regime change and that the famine in Tigray is being orchestrated by TPLF to that end.

In late March, the federal government formally communicatedthat it allowed a full week’s worth of aid into Tigray. This was a tacit admission that the decision regarding whether aid is delivered or not is in the hands of the Ethiopian government.

Finally, as recently as 5 June, Deputy Prime Minister Demeke admitted that the federal government blocks aid because it can be used by the TPLF.

Despite such irrefutable evidence, government supporters accuse TPLF of being responsible for the lack of humanitarian access.

According to these statements by high-ranking Ethiopian authorities, the siege and embargo of Tigray are intentional acts of war. The plan is to force the people of Tigray and their regional government to submit.

It must be recognized that holding a civilian population hostage is a war crime according to the Geneva Conventions. Using aid delivery and the resumption of basic services such as electricity, banking, trade, and telecommunications as a bargaining chip is also morally bankrupt.

The official justifications for the starvation in Tigray given to foreign diplomats—such as bureaucratic hurdles, that aid trucks did not return, conflict in Afar along one of the dozen access roads, and collateral damage to infrastructure—are incredibly superficial in contrast to the unrepentant statements made by Ethiopian government officials.

In hindsight, the plan to decimate or even exterminate the TPLF and Tigrayans has been articulated by Ethiopian and Amhara nationalist elites for decades.

The shocking statement by Abiy’s advisor Daniel Kibret, a deacon and preacher in the Ethiopian Orthodox Church, that Ethiopia needs to exterminate the Tigrayans, just like the British did with the Tasmanians back in the 1830s, fits with a narrative that was initiated twenty years earlier.

Wodajeneh Meharene, an Evangelical pastor and a close confidant of Abiy, also believes that “locking up humanitarian access” to starve the Tigray people into submission is a legitimate way of bringing the war to a conclusion.

Daniel and Wodajeneh wield significant influence in their respective Christian denominations. Their calls for collective action against Tigrayans show how politicized religious leaders have become in Ethiopia. This has arguably contributed to the war’s widespread acceptance within certain religious communities.

Such views are a continuation of several articles published in Eskinder’s Askual newspaper in 2004. They urged Ethiopians to eradicate “the nation’s cancerous Jews” (the Tigrayans) by imitating Nazi Germany’s extermination policy. Written in Amharic, under the title “Get lost, Judae”, these articles stayed under the radar for most foreign observers.

One article, published on 1 May 2004, states: “The Germans stood up resolutely. Their struggle continued. The Jews were captured en masse and deported to concentration camps. Especially, male Jews between the age of 16 and 60 were targeted.”

In many ways, these pieces read like a script for the massacres, starvation, and detentions that have occurred in Tigray since November 2020.

While Eskinder and others like him are responsible for propagating such blatantly genocidal rhetoric, the direct culprits carrying out the Tigray massacres and implementing the blockade are the governments of Ethiopia, Eritrea, and the Amhara region.

Who are the Terrorists? By T.K