HR/VP Blog – For almost two years, the Tigray region in Ethiopia has been in the grip of an atrocious war with hunger and sexual violence used as weapons as Amnesty International and Human Rights Watch have documented repeatedly. It is time to put an end to this bloodshed that affects the entire Horn of Africa region. The EU appeals to all parties to finally engage in dialogue and compromise. 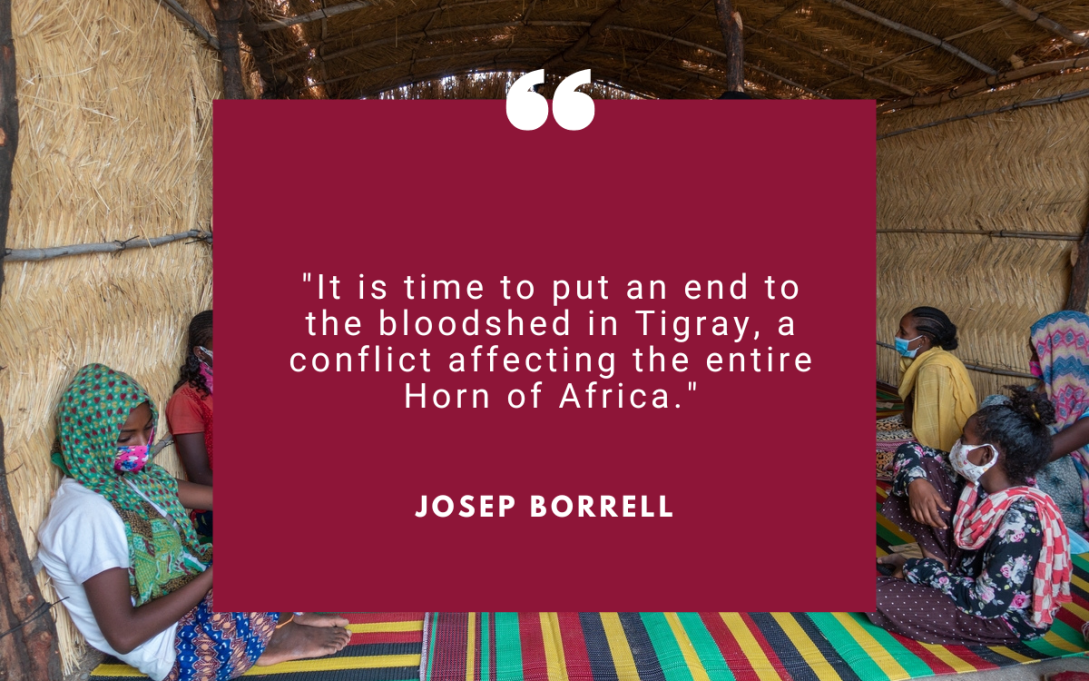 A few weeks ago, Ethiopia came second in the world athletics championship. Among the medallists, many champions from Tigray wore the colours of Ethiopia, which has always been a multi-ethnic nation. Taking advantage of the occasion, some tried to draw the world’s attention to the suffering that their own people endured.

The President of Ethiopia, Sahle-Work Zewde, also denounced the deadly violence that is tearing her country apart: “There is a winner in Ethiopia. It is the Ethiopia we know and want. However, Ethiopia is also the land of the cruel and the destructive. It is the land where we have witnessed outrageous cruelty.” She is right: ethnic violence, violations of human rights and of international humanitarian law are commonplace. And while the peace rhetoric of the conflict parties continues, everything is still weaponised: access

More than 13 million persons in need of humanitarian assistance

The World Food Program estimates that more than 13 million people are in need of humanitarian assistance in northern Ethiopia (4.8 million in Tigray; 1.2 in Afar; and more than 7 million in Amhara). Despite some progress, access to these populations – especially in Tigray – is still a major problem. So is the access to fuel and fertilizers at a time where Ethiopia is experiencing one of its worst droughts. Other regions in the country are also experiencing tensions, while various sub-national and transboundary conflicts continue to worsen the security situation in the country and beyond. Recent Al-Shabaab infiltrations across the eastern border with Somalia are highlight the danger that a prolonged crisis will entail.

“A negotiated ceasefire, unfettered humanitarian access and full resumption of services in Tigray, as well as accountability for atrocities committed by all parties, are a prerequisite to revive our partnership with Ethiopia’s authorities.”

These are the facts. As repeated during the last Foreign Affairs Council, the EU has made its key asks very clear to the Ethiopian government since the beginning of this war: a negotiated ceasefire including the withdrawal of Eritrean troops, unfettered humanitarian access and full resumption of services in Tigray, as well as accountability for atrocities committed by all parties, are a prerequisite to revive our partnership with Ethiopia. Despite the truce announced in March, some improvements on the ground and various announcements regarding political dialogue, there has been not enough progress “for a full normalization of our relationship” stated the EU member states at our last FAC.

The EU has never stopped supporting the Ethiopian population

The EU has suspended its budget support to the Ethiopian government. However, it has never stopped supporting the Ethiopian population. Just before the summer, we announced a package of around €80 million to finance programmes in the area of health and education, with a special focus on areas affected by the conflict.

“The restoration of basic services and free movement of people, goods, and services, can neither be disputed nor negotiated. The government of Ethiopia is expected to fulfil its obligations to the people of Tigray and beyond without further delay.”

My colleague Commissioner Lenarcic visited Ethiopia  last June. His statement was very clear: the restoration of basic services and free movement of people, goods, and services, can neither be disputed nor negotiated. Because this is about saving lives. We expect the government of Ethiopia to fulfil its obligations to the people of Tigray and beyond without further delay. This is not about accepting preconditions by one side for the political process to start; this is about respecting the obligations a government has vis-à-vis its own people.

On 2 August, the UN, the EU and the US Special Envoys for the Horn of Africa travelled together to Addis and to Mekelle to talk to the conflict parties and to explore ways to resume the delivery of basic services and reconnect power grids. They heard the conflict parties talking about peace, but the war, a silent war, is still going on.

Time for the conflict parties to show real commitment to peace

It is now time for these conflict parties to show real determination in their commitment to peace. For the sake of their people. For the sake of their country, whose fragility poses immense risks to the entire region. Agreeing peace requires courage – more courage than continuing the war – to engage in dialogue and compromise. While the restoration of services and lifting all restrictions in Tigray are a clear sine qua non, there are numerous other “bones of contention” that need to be negotiated. We need strong African Union leadership to succeed in this process with the solid support of the UN, the US, the EU and other like-minded partners.

Engaging in a peace process is not about one party winning, and the other one losing. It is about exercising political leadership in its deepest sense. Even if there is only a small window of opportunity, now is the time: we call on all the conflict parties to seize this opportunity.

A Homeless Stargazing to Reside in a Palace!