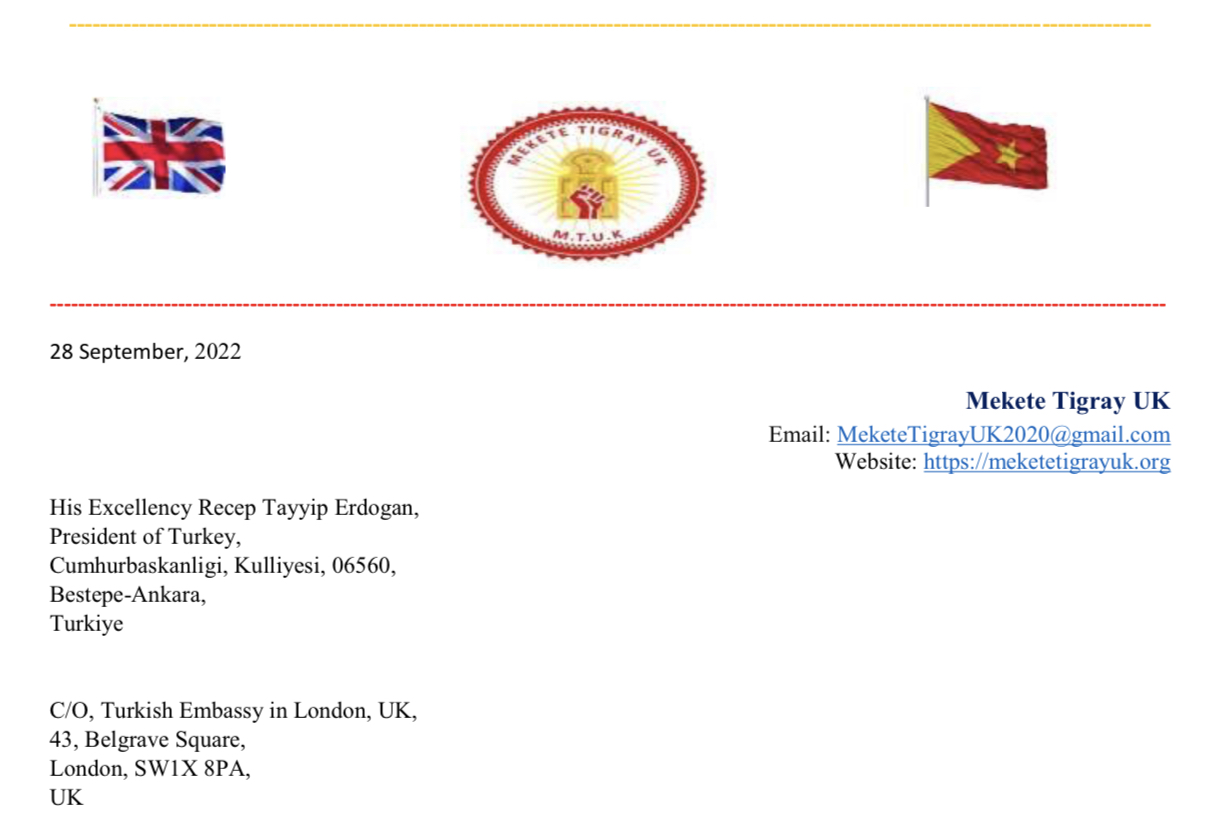 1. We, the Tigrayan Diaspora, independently organised as Mekete Tigray UK and as UK Citizens and Residents of Tigrayan Ethiopian origin, are yet again expressing our horror and are protesting in front of the Turkish Embassy in London, UK, against the Turkish government’s direct and proven complicity in the genocidal war being waged against the Tigrayan people by the Ethiopian and Eritrean regimes. The Tigrayan people, a proud African and black people, have been subjected over two years now to the worst war the World has witnessed in the 21st Century. War Crimes, Crime against Humanity, Ethnic Cleansing and Genocide have been committed in Tigray as testified by the latest  UNHRC report   and numerous corroborated  evidences including from the Human Rights Watch and Amnesty International to mention but a few.  Some of the global testimonies on the genocidal war on Tigray are cited  below as exemplars:

“It is not the fault of the Tigray people. Many barbarisms have been conducted in Ethiopia, but what is happening in Tigray is of the highest brutality and cruelty. This is genocide of an entire people. They want to wipe-out the people of Tigray from the face of the Earth. I have said a lot of things but no one allows the message to be shared. Rather, it is being stifled and censored. The whole world should know it. The World must act now including all religious organisations to make their voice to stop the genocide.”

(The Patriarch of the Ethiopian Orthodox Tewahedo Church, Abune Mathias, 8 May 2021)

“A Pogrom is happening in Ethiopia. Ethiopia is killing its own citizens wantonly. That is chilling, but true: by attempting to extirpate Ethiopia of Tigrayan ethnicity and heritage, Ethiopia’s military and government stands accused of purposeful ethnic cleansing, a precursor to all-out genocide, as outlawed by the UN Convention against Genocide”

“I vividly recall the shocking images back in 1984 of a million emaciated Ethiopian men, women and children, many of them from Tigray, who had fled the country in the midst of a massive famine caused by prolonged drought, widespread food shortages, and discriminatory government policies. Today, the people of Tigray are being subjected to human rights atrocities on an appalling scale, and they are being denied urgently needed humanitarian aid – aid that is being blocked by the Ethiopian and Eritrean militaries as well as other armed groups. The terrible reality today is that famine, crimes against humanity and genocide are occurring in Tigray, and they are occurring for one reason:  the complicity of government officials in Addis and in Asmara.  In fact, there are reports that the situation in Tigray could be worse than in Darfur.”

2. The Turkish Government has consistently and vigoursly aided and abetted the genocidal war in Tigray by providing war armaments including drones and war technologies as well as financial, military personnel and logistic support to the regimes in Ethiopia and Eritrea. Turkey is responsible and will be held accountable for its direct role in enabling and facilitating the commission of genocide in Tigray, which is in contravention of International Humanitarian and Human Rights laws. In the war on Tigray, over 500,000 civilians have been killed where hunger, starvation and famine are used by the Ethiopian and Eritrean regimes as a stratagem of war. Sexual violence against women and girls is weaponised and to date over 120,000 have become victims. This scale of mass sexual violence against women and girls in conflict situations is unseen since the Second World War. The economy, social fabric and infrastructure of Tigray are in tatters. Tigray is under a complete economic and transport blockade as well as military siege where a second phase of invasion by the Eritrean and Ethiopian armies is currently underway. This time also supported by massive Turkish armaments including drones, military logistics and personnel.  Over the last month Turkish drones have killed children and innocent civilians as well as demolished civilian infrastructure. The Turkish Government and President Erdogan are wholly immersed in the blood of the innocents in the genocidal war on Tigray, and as such the Turkish political and military leadership will be held accountable in the courts of world justice.  Tigrayans, Africans and black peoples’ lives matter, and the Turkish Government’s crimes against international humanitarian and human rights law will never be forgotten, as in the case of the Armenian Genocide, in the annals of Tigrayan, Ethiopian and African history. It is a double shame that not learning from history, Turkey is repeating its genocidal reputation in Tigray, Ethiopia and Africa.

“We must stop barbaric crimes against women. Gang rapes and mutilation are being carried out in the Tigray conflict but the world prefers to look the other way. Innumerable witness accounts leave no doubt that war crimes are being committed on a huge scale in Tigray, the region of Ethiopia where a military offensive against rebels was launched last November. Often committed by the armed forces of neighbouring Eritrea, working alongside Ethiopia’s own army, these actions include mass sexual violence against women and girls. Such reports are terrible enough but it is only when you go into the details that you can fully appreciate that these crimes are against the very core of humanity. The accounts from Tigray include women being repeatedly raped next to the bodies of husbands or brothers who had tried to protect them; being told the men in uniform raping them are deliberately selected for being HIV-positive; assaulted with….”

3. Yet, Turkey still supports the regimes in Ethiopia and Eritrea to continue with their genocidal wars. There is ample and corroborated evidence of Turkey’s involvement in the genocidal war on Tigray. The token and hypocritical humanitarian support allegedly provided by Turkey to Ethiopia is to camouflage for the Turkey’s much larger complicity in the Genocidal war. As we protest, Turkish drones are bombing civilians and economic infrastructure in Tigray resulting in the deaths of scores of innocent people and children and the destruction of schools and hospitals.

“Ethiopian officials and allied militia fighters are leading a systematic campaign of ethnic cleansing in Tigray, the war-torn region in northern Ethiopia, according to an internal United States government report obtained by The New York Times. The report, written earlier this month, documents in stark terms a land of looted houses and deserted villages where tens of thousands of people are unaccounted for. Fighters and officials from the neighboring Amhara region of Ethiopia, who entered Tigray in support of Prime Minister Abiy Ahmed, are “deliberately and efficiently rendering Western Tigray ethnically homogeneous through the organized use of force and intimidation,” the report says. ‘Whole villages were severely damaged or completely erased’, the report said.”

4. We strongly protest and urge the Turkish Government to stop and desist from being complicit in the genocidal war on Tigray by stopping to provide armaments and financial support to the genocidal regimes in Ethiopia and Eritrea. Instead, we urge the Turkey Government to play a constructive role by supporting the peaceful resolution of the war in Tigray and other conflicts in Ethiopia. We also urge the Turkish Government to genuinely assist in the global effort to alleviate the humanitarian crisis and economic reconstruction in Tigray and Ethiopia at large.

“Ethnic cleansing of Tigrayans may prolong Ethiopia’s civil war. Evidence emerges of war crimes by forces allied to Abiy Ahmed’s government. The lucky ones were frogmarched onto buses and driven across the river. The less fortunate were slung into detention camps and left there to rot. Others were murdered in the streets or hacked to death as they cowered in their homes. “We don’t need a single one of them anymore,” a militiaman told a foreign researcher last year. “They cannot be trusted.” Since the start of Ethiopia’s bloody civil war 18 months ago, there have been frequent allegations of ethnic cleansing targeting people from the northern region of Tigray. Antony Blinken, America’s secretary of state, first levelled this charge more than a year ago, infuriating the government of Abiy Ahmed, Ethiopia’s prime minister, which strongly denied it. Because the government has imposed a tight blockade of the region, it has been hard to assess the claims of atrocities. But some horrifying hints have emerged; such as the corpses with their hands bound that have washed up on river banks in Sudan.”

5. Tigray has been a gate and citadel to Ethiopian civilization, including being the springboard for the spread of Christianity, Islam and Judaism as well as being the home of the Al Negasi. It is ironic that Turkey is supporting regimes that bomb, using Turkish drones, religious institutions including the first Mosque in Africa, the Al Negasi, based in Negash in Tigray. It is also ironic Turkey provided funding for the refurbishment of the Al Negasi Mosque in Negash, Tigray, for which President Erdogan was honoured with a Doctorate Degree by Mekelle University in Tigray. It is a shame and crime that the Turkish Government and President Erdogan are now associated with the commission of genocide against blacks and Africans that the proud people of Tigray in Ethiopia are part of. We give notice that as Tigrayans, Ethiopians, Africans and blacks, we will continue to protest non-stop and everywhere globally in order to expose the genocidal complicity and involvement of the Turkish Government in the War on Tigray.

“The world’s worst humanitarian crisis is in Tigray. In the Ethiopian Region of #Tigray, the drought is compounding a man-made catastrophe for 6 million people who have been under siege from Ethiopian and Eritrean forces for 21 months. Can the world come back to its senses and uphold humanity, or the 6 million lives do not matter? Or is it the issue of ‘colour line’?”

6. Finally, we thank you, and we look forward to hearing your response to our horror and concern about the role of the Turkish Government in the Genocidal war on Tigray, Ethiopia. We have attached below a hard copy of this email. We can be contacted at the above address. Thank you.

Tigrayan Community in the UK

Tigray Women Association in the UK

The Rt Hon Kwasi Kwarteng MP; Chancellor of the Exchequer;

The Rt Hon Baroness Evans of Bows Park; Leaders of the House of Lords;

The Rt Hon Baroness Smith of Basildon; The Shadow Leader of the House of Lords;

His Holiness Pope Francis; Sovereign of the Vatican State;

His Holiness Abune Matias, The Patriarch of the Ethiopian Orthodox Tewahedo Church;

The Rt Hon Ian Blackford MP; Leader of SNP in the UK House of Commons;

The Rt Hon Liz Saville Roberts; Leader of Plaid Cymru in the House of Commons;

H.E. Annette Weber, EU Representative for the Horn of Africa;

Richard Sharp; Chairman of the BBC Board;

An Urgent Call to Stop Ethiopian and Eritrean Armies Provocation of a Second Round of Genocidal War on Tigray, Ethiopia